Hey people, hope everyone is having a nice holiday season so far. Just wanted to send out a quick update to close out 2016. It ended up being a rather productive year for Feel It, with four new releases that I am really proud of: 7"s for Bad Noids + Rik and the Pigs and LPs for The Landlords and NASA Space Universe. I also got away with touring for over two months of the year - driving the Spaniards in La URSS and my own band, Fried Egg. Needless to say this has all been a blast in spite of the godawful election results and what I'd call a pretty lame and drama-filled year for the Richmond scene. But yeah, onto the real news here, lets talk about records...

Just updated the distro with the latest Total Punk and Lumpy Rex releases, including TWO new Rik and the Pigs singles that absolutely rule. Plenty of other quality new arrivals up there too...I especially recommend the latest issue of Not For Everyone for those in search of a quality new music mag.

I also just launched the first episode of Feel It Radio over at: https://www.mixcloud.com/feelitrecords/
The radio show is something I've been toying with forever and finally have the time to commit to. The goal is to play a mix of material from my collection and new releases from the distro. In general, I'd just like to get away from copy/pasting descriptions of records on the site and, y'know, actually play and talk about new releases like a real radio DJ!  Anyhow, I welcome any feedback on the first show, as I'm still fine tuning the formula going forward.

What else? Feel It is finally on Facebook, where I'll post smaller bits of label news and distro updates in between newsletters. So if you wanna keep up with that, you can like the page HERE. We're also on Instagram @feelitrecordshop in case you didn't know. 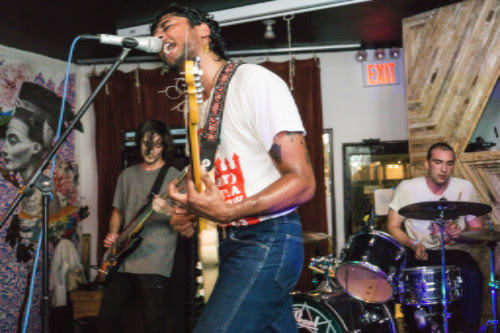 OK and onto some upcoming release news! Mixes are finally in for the Kaleidoscope Vol. 3 12". Let me tell you, this record is truly incredible. Six new tracks that follow up quickly on the heels of Kaleidoscope's 7" on Katorga Works. I had kind of expected the new material to be a bit more experimental ala the Kaleidoscope tape releases, and while there is certainly an inventive and loose quality to the new tracks, they are also very concise and focused. We've got the project in line at Bonati Mastering right now which means I should have a preview track to share soon!  In the meantime, Kaleidoscope are heading out on a short tour in January, info as follows:

Kaleidoscope will also be appearing at Everything Is Not OK III in Oklahoma City, March 9-12, 2017.

I'm also pleased to announce that Feel It will be reissuing The Landlords Hey! It's A Teenage House Party! LP from 1984. Following our archival release of their long-lost second album, Fitzgerald's Paris, it only makes perfect sense to give the first Landlords LP a proper reissue. A phenomenally underrated 21 track album from the same Charlottesville, VA hardcore punk weirdos that spawned Happy Flowers. Restored from the original 1/4" masters recorded by Don Zientara at the legendary Inner Ear Studios (with a fun guest vocal spot from Dave Smalley!). This LP blew my 15-year-old mind when I first heard it and is a cult classic among US Hardcore aficionados...beyond stoked to reissue this thing with some cool unpublished photos and possible bonus download material.  See the video below for a taste of the LP.